The Open and Honest Truth About Solar Power in Massachusetts

And why “Big Electric” wants these 5 lies to spread

My name is Dallin Maw. And, along with my partner, Eric Israelsen, we run Summit Energy, a local Massachusetts company.

We’re sick and tired of the lies Big Electric are spreading.

Before I share those lies with you, let me tell you why Big Electric is running scared.

Big Electric is my name for all the electric utility companies here in Massachusetts and around the rest of the United States.

That’s because, even though they might be individual companies, they act as a whole

Why Big Electric is Running Scared

Despite Big Electric’s attempt to sabotage it, solar is growing at an incredible pace.

Which is great for the homeowners that choose cleaner, greener, cheaper electricity.

As the New York Times puts it:

“Over the past six years, rooftop solar panel installations have seen explosive growth – as much as 900 percent by one estimate.”<

And as you can see in the chart above, the solar industry was set to grow even more. It was set to double by 2029.

But that’s all changed now that Big Electric is scared. 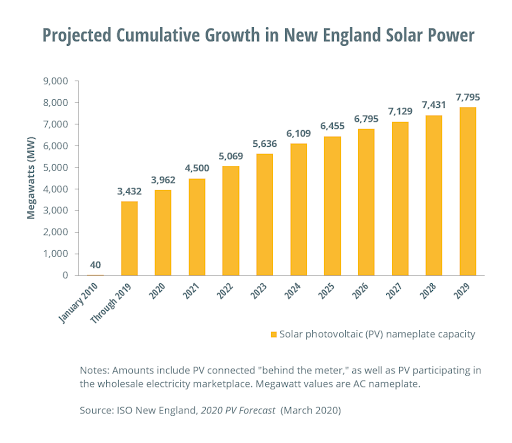 Rather Chat With Someone Now?

Speak With a Solar Energy Expert

The New York Times goes on to say …

“That growth has come to a shuddering stop this year …
… the decline has also coincided with a concerted and well-funded lobbying campaign by traditional utilities, which have been working in state capitals across the country to reverse incentives for homeowners to install solar panels.”

And this is happening right here in the Pilgrim State.

“National Grid has employed a total of six lobbyists in Massachusetts thus far this year. Four of them are the utility’s in-house lobbyists and two work for the lobbying firm Joyce & LeBretton. The utility paid its lobbyists a little over $94,000 for the first six months of 2020, with $72,000 doled out to Joyce & LeBretton.

Last year the company spent nearly $200,000 on lobbying in Massachusetts.”

Why wouldn’t Big Electric want you to save money on electricity?

Because they’re only interested in lining their own pockets.

Why is why I’m writing to you today.

As I mentioned earlier, I run a company called Summit Energy.

We install solar panels for Massachusetts homeowners, often with our “Zero Down” program.

So, yes, we have a vested interest here. If Big Electric manages to shut down solar here, we stand to lose a lot.

I’m ok with that – that’s business.

Wouldn’t you rather make up your own mind, rather than be manipulated?

Here’s what Big Electric is saying …

Big Electric will tell you that, if you choose solar, your neighbor’s electric bills will go up.

On the face of it, that rings true. After all, if less people are on the grid, there’s fewer people to share all of the costs, right?

The truth is, there’s often so much excess energy coming from the homes that have solar that there’s no need for expansion by the electric companies.

Which is why, as it turns out, solar reduces the overall cost, not only for homeowners who choose it – but for those who don’t as well.

Have you ever driven when it’s cloudy? Of course you have. And my guess is you don’t need to put your headlights on.

That’s because, even when it’s cloudy, there’s still plenty of sunlight.

Which is why solar panels generally work just fine on cloudy days.

Yes, it’s true that on very dark cloudy days, there can be a reduction in solar power generation … but in our experience, in Massachusetts, most homeowners never even know it.

And then there’s the cold …

Yes, even though most people don’t realize it, the cold actually increases the power output from the solar panels.

Which is not to say they don’t work in the summer.

In fact, solar panels really don’t start losing any output at all until the temperature hits 107 degrees.

And as you know, we don’t get too many days above 107 degrees here in Massachusetts.

Solar panels usedto be made with materials that could hurt the environment.

But those days are long gone.

Today, they’re made using the same materials that you already have in your house – glass, aluminum, and copper.

Yes, the power cells do contain some heavy metals…

But those metals will not leach into the environment, even when the panels are damaged in storms or fires.

It’s true that those heavy metals need to be mined. But so does coal. And unlike coal, solar gives off no dirty emissions or waste.

All in all, solar is much cleaner and better for the environment than traditional electricity solutions.

Lie #4 – Solar panels hurt the resale value of your home.

Again, this is just another lie from desperate Big Electric.

In fact, the US Department of Energy did a study on how solar affects resale value of your home.

And the study found that solar panels increasethe value of your home.

In fact, a standard 5kW system could increase the value of your home by as much as $20,000.

Lie #5 – Solar panels cost more than they save.

This last lie is the worst. After all, many Massachusetts homeowners consider solar panels to save money.

The truth is, thanks to programs like our Zero Down program, many homeowners will save money right from day 1.

How much will you save? That depends on a number of factors – including how much electricity you use today.

With our solar power system you save now, save in the future, and make more when you sell.

And that’s information that Big Electric is trying desperately to keep from you.

How do you know if your home qualifies for the zero money down program?

CLICK HERE NOW TO SEE IF YOUR HOME QUALIFIES

Get the Summit Difference in your area

Learn More About Our Coverage Areas.

Empowering your space with solar

Summit Energy offers a wide range of cost-effective solar energy solutions. We work with homeowners and businesses to help them reduce their energy bills, while also reducing their carbon footprint.